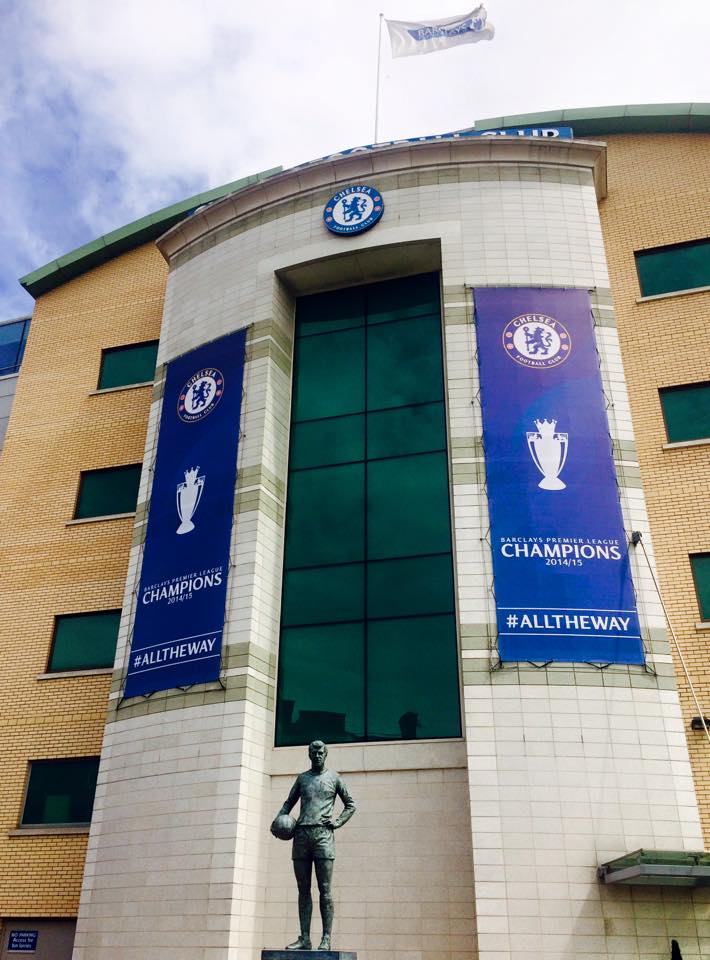 Notice is hereby given that the Annual General Meeting of the Chelsea Supporters Trust will be held at 14:00 on Sunday 13th August 2017 in the Hollins Suite, Millennium Reception, West Stand, Stamford Bridge, Fulham Road, London, SW6 1HS.

All members are welcome to attend the AGM but we must have confirmation that you will be attending no later than 10.00 pm on Thursday 10th August as Chelsea FC require us to provide a list of attendees for security. If you turn up without having confirmed your intention to attend by the time above you will not be admitted to the meeting.

To attend the AGM Members need to have paid their annual membership subscription. If you are unsure whether you are paid up or think that your membership has lapsed please check by emailing membership@chelseasupporterstrust.com

Light refreshments will be provided.

Directions to the Hollins Suite can be downloaded here.

The agenda is reproduced below and can also be downloaded here.

The standing orders for the AGM can be downloaded here.

The draft accounts and annual report will be circulated to members by email in advance of the meeting and are available to download here.

Following on from the AGM, and after a short break, Dan Levene will once again host our Chelsea-centric quiz, which was keenly contested last time with the winner’s trophy up for grabs for the victors!

Notice is hereby given that the Annual General Meeting of the Chelsea Supporters Trust will be held at 14:00 on Sunday 13th of August 2017 at the Hollins Suite, West Stand, Stamford Bridge, Fulham Road, London, SW6 1HS.

Following the success of last year’s quiz, organised and compered by Dan Levene, a similar event will be held after the AGM (at c16:00), in the Hollins Suite.

By order of the CST board

ACCOMPANYING NOTES TO THE AGENDA

The voting will take place online through SurveyMonkey. On the next working day following the AGM (Monday 14th August 2017), members will receive an email containing a unique link to SurveyMonkey where they will be able to vote in favour or against motions raised at the AGM .

The board elections will not be contested as there are 9 candidates standing and 9 positions available. The board election will thus take the form of an affirmative vote of each candidate in accordance with rule 8.3 of the CST Election policy (noted below).

Motions from the Chelsea Supporters Trust Board

Elections to the Board of the Chelsea Supporters Trust are uncontested as there are 9 candidates standing for 9 positions. As such, election to the Board shall take place in accordance with Rule 8.3 of the CST Election policy which states:

The prospective Board Members are as follows (in alphabetical order):

Motion 2. Approval of 2016/17 Accounts and Use of Independent Examiner
The Chelsea Supporters Trust accounts for the year ended 31/5/17 are approved.  Provided revenue remains below £100,000 p.a., in line with accepted practise the Chelsea Supporters Trust Board should continue to appoint an independent examiner at the end of each financial year, rather than an auditor.

The Chelsea Supporters Trust should continue to affiliate to Supporters Direct and the Football Supporters Federation, work with these organisations as appropriate to further the interests of Chelsea supporters, and football supporters in general and take part in national and local campaigns as deemed appropriate.

Motions 4-15 are submitted to the membership following issues which arose in the 2016/17 season and/or were raised in a review of the results of the June 2017 membership survey. The background to a number of these issues, and details of progress in the past twelve months, will be contained in the 2016/17 Chelsea Supporters Trust Annual Report, to be circulated to voting members in advance of the AGM.

Motion 4. Stamford Bridge Redevelopment
The Chelsea Supporters Trust Board notes with approval the progress made by the club owner with the plans to redevelop Stamford Bridge. The CST board is mandated to continue to work with the appointed consultants, the club and other relevant stakeholders to help ensure supporter opinion is properly and openly taken into account with regard to issues such as facilities and ticket pricing as the process moves forward.

Motion 5.  Future of Chelsea Pitch Owners
Regardless of the redevelopment of Stamford Bridge, the Chelsea Supporters Trust board believes that the retention of the CPO in its current role is an essential safeguard for Chelsea supporters with regard to the long-term future of Stamford Bridge. It is mandated to continue to work with the CPO board, and other appropriate bodies, towards fulfilling this aim.

Motion 6.  Temporary Stadium
Regardless of when Chelsea move to a temporary stadium, to which location and for whatever duration, the Chelsea Supporters Trust board believes that such a move presents significant opportunities with regard to the implementation of an attractive ticket pricing structure, including the opportunity to attract significant numbers of young supporters. Given this, it is mandated to press the club for such a structure to be implemented.

Motion 7. Atmosphere Concerns and Safe Standing
The Chelsea Supporters Trust board is mandated to continue to work with the club and other supporters groups looking to improve the atmosphere at Stamford Bridge, as appropriate. The results of the specific Safe Standing survey carried out among Chelsea supporters in 2014 and subsequent surveys indicate overwhelming support for Safe Standing. The Board is mandated to continue to campaign for standing sections to be introduced as part of the Stamford Bridge redevelopment and at other football stadia, as part of the wider national ‘Safe Standing’ campaign co-ordinated by the Football Supporters Federation. We will press the club to take a leading role to support Safe Standing.

Motion 8. Ticket Pricing and Availability
In the light of the extra TV money received by Premier League clubs, the Chelsea Supporters Trust board is mandated to pursue the issue of fair ticket pricing and ticket allocation for home and away, as well as matters including, but not limited to, rearranged fixtures, away fan travel and stewarding/policing, through whichever channels they deem appropriate. These channels include, but are not necessarily limited to, Chelsea FC; the Premier League; the Football Association; relevant television companies; other Supporters Trusts; the Football Supporters Federation and Supporters Direct.

Motion 9.  Kick-Off Times
The number of Premier League games rearranged to suit the television companies, and the short notice given for such rearrangements, causes both inconvenience and increased cost to match going supporters. The Chelsea Supporters Trust board is mandated to work with other supporters trusts and appropriate bodies to push the TV companies and Premier League for more notice to be given for such rearrangements, for published deadlines to be strictly adhered to and, where appropriate for supporters to be compensated for the extra cost.

Motion 10. Membership of Safety Advisory Group
The Safety Advisory Group (SAG) is a statutory council-led committee set up under the Safety of Sports Grounds Act 1975. The Chelsea SAG has representation from the London Borough of Hammersmith and Fulham, Metropolitan Police Service. British Transport Police, London Fire and Emergency Planning Authority, London Ambulance Service, St John’s Ambulance Service, the Sports Ground Safety Authority and the club. It meets twice a year to discuss relevant issues with regard to Chelsea Football Club. After representations to the local council in late 2015, the Chelsea Supporters Trust now have the opportunity to review the SAG agenda, submit items for discussion and review the meeting minutes. The Chelsea Supporters Trust board believe that, though this is progress, there is no valid reason whatsoever why full membership should not be granted and are mandated to push for this.

The Chelsea FC SAG Terms of Reference can be downloaded here

Motion 11.  Ticket Touting
The Chelsea Supporters Trust board is mandated to use its involvement with the Safety Advisory Group with a view to reducing the activities of ticket touts in the Fulham Broadway area before Chelsea home games and to participate in campaigns designed to achieve this. It is also mandated to work with organisations represented on the SAG to assist in educating potentially vulnerable groups in the perils of purchasing tickets in this way, or through using unofficial on-line ticketing organisations.

Motion 12. Stakeholder Engagement
The Chelsea Supporters Trust Board has made some progress since its inception in terms of building relationships with relevant stakeholders at a local and national level. The board is mandated to build on this work and to develop relevant effective working relationships with Chelsea FC; Hammersmith and Fulham Council; Local Members of Parliament; Metropolitan Police Service; British Transport Police; Premier League; Football Association; relevant broadcasting organisations; the Department for Culture, Media and Sport and other bodies as deemed appropriate. Where deemed to be more effective (e.g. with the Premier League, FA, broadcasting organisations and DCMS), these relationships are to be built working in conjunction with other supporters trusts or other appropriate organisations.

Motion 13. Football In The Community
The Chelsea Supporters Trust Board is mandated to participate in and support appropriate activities designed to promote football, Chelsea FC and its supporters in the community local to Chelsea FC. This could, for example, take the form of charitable work or through supporting specific supporter based campaigns as they arise.

Motion 14. Club Heritage
Building on the Brompton Cemetery Chelsea Graves project, the Chelsea Supporters Trust Board is mandated to work with the club, club historian Rick Glanvill and other appropriate bodies/individuals to identify appropriate projects to reflect and enhance the club’s heritage.

Motion 15. Supporters Club Ticket Allocations
The Chelsea Supporters Trust board has had representations from supporters clubs in the UK and abroad with regard to the perceived unfairness of the ticket allocation by the club to different categories of supporters club. They are mandated to work with affiliates, and other supporters clubs, to identify a potential fairer solution and present it to the club.