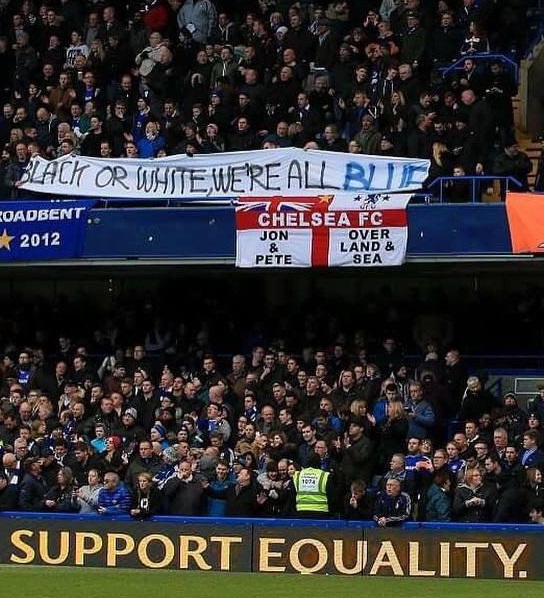 The issue of anti-Semitic chanting at Chelsea matches has received widespread coverage in the media recently. The Club and the Trust have both publicly condemned such chanting. While it is true that the majority of Chelsea supporters do not behave in a racist and anti-Semitic manner, a minority continue to chant words that are offensive to Jewish Chelsea supporters and indeed our owner, Roman Abramovich.

What is often overlooked is the impact this has on those who hear it in and around the stadium on a match day. We were contacted by a mother and son who experienced this at first hand and gave us permission to share their experience of anti-Semitism at Stamford Bridge. The following account exemplifies what it means to our own Jewish supporters who hear anti-Semitic chanting during matches.

Mother and son Karen and Jack are lifelong Chelsea supporters. On Saturday 22 December, they attended the Chelsea v Leicester match at Stamford Bridge. (Names have been changed).

Karen: My Dad was born in Worlds End, Chelsea. He lived in Parsons Green, and had a season ticket. His father was a supporter when they created the club in 1905. So my family have been supporting Chelsea since the very beginning.

I’ve been going since the late 70s. So when my kids were born there was no question about who they would support. We are all members – that’s how we buy tickets. Alternatively we sometimes use friends’ season tickets when they can’t go.

For the game against Leicester, we sat in the Matthew Harding Lower – on the East Stand side. It was a friend’s season tickets. The majority of the people who sit around those seats are really friendly.

Chelsea is a big part of my family’s life. We’re British, and we’re also Jewish. But we are very much a Chelsea family and ethnicity should not be relevant to our love and support of our beloved Chelsea.

Jack: I’m at university in the Midlands, and I try and get tickets for games nearby. I went to the Wolves game recently – I was in the home end! So I had to remain quiet the whole game.

I went to West Brom when we won the league. Even though it was impossible to get tickets we went to a Chelsea pub close to the ground to soak up the atmosphere. It was a great night.

But there were people in that pub – Chelsea fans – singing about Spurs fans, and how they don’t have foreskins. People from my age into their 50s. That’s out of order. There is ignorance there, but why would you make a statement like that?

Karen: Against Leicester there was somebody behind me and Jack, and he was chanting a lot. He was really loud: one of those people that want to try and get everyone singing.

He started chanting ‘we hate Tottenham’.

And then he suddenly shouted ‘We hate Y-ds’. It was a white guy in his 40s. His mate told him: “Be careful” and he stopped.

Jack: It happened about five or six times. He was screaming it – him on his own. I was close to turning around, but I just felt that I didn’t really want that confrontation. My whole mood changed after that. You’re at a game of football, and you don’t expect to hear any of this. I was so disappointed. I just thought: ‘Why on earth is that relevant to a game of football?’

Karen: I thought: ‘These are not my seats. I’m sat next to someone who I don’t really know, and I wasn’t sure how they might react if I made an issue of it. Later, when I mentioned it, they said: ‘I would have reported him’.

I just felt really uncomfortable. Disturbed, I would say. I was so disappointed. I just thought: ‘Why on earth is that relevant to a game of football?’

I know this happens, but it was so close by. It felt like an assault.

I was left feeling: ‘What have I done to him? Why would that man, or anyone, not like us – simply because we are Jewish?’ They don’t know me or Jack.

Jack: It has definitely got worse in recent seasons. I think social media has a bit of a role to play in it. It is a bit stupid and short-sighted though, especially as our owner, Roman Abramovich, is Jewish. It is ridiculous that it is that aspect, with Tottenham or whoever, that someone would pick on.

Karen: Should anyone not understand: the word is a derogatory word about Jewish people. Whoever you might be directing it at: if Jewish people are present, then it us who are hurt by it.

But what I don’t understand is this… If you know that ‘Y-d’ is a bad word, but you don’t know what it means, then how could you possibly think it acceptable to shout it out in public?

There has been so much in the media about this, and about stopping it, and people are surely well aware that it’s not acceptable. There is maybe some testing of the boundaries going on here.

Jack: There are a million things you can sing about football. You don’t have to bring in race, religion, whatever. It’s not relevant to sport at all. It is really upsetting for anyone – for any race or religion – to receive targeted abuse. Even if it is not calculated to directly hate those people.

Karen: As I said, I’m British, and I’m Jewish. But I’m proud to be British, even though there are times when it just makes me ashamed of some people who are the same nationality. Like a lot of Jews, I do have a family link with the Holocaust – relatives who escaped and some who were exterminated.

If you said back then, in the 1930s, that things would end up as they did – then a lot of people would have been insistent that it couldn’t happen. It did happen.

Little things have the potential to become terrible things. Shouting abuse about any race or religion is dangerous.

Jack: I think the club’s Campaign against Anti-Semitism is brilliant. I think they should try to educate and reform people. Teaching people about why this is a problem, for us as Jews, is important. I think there needs to be a wide understanding of that.

One thought on “Experiencing Anti-Semitism at Stamford Bridge”